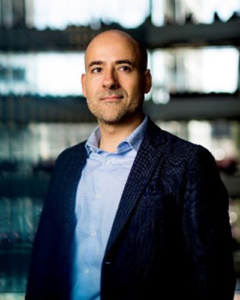 Executive Director of the KNMRC

Matteo Rinaldi, is a Full Professor in the Electrical and Computer Engineering department at Northeastern University and the Director of the Kostas Nanotechnology Laboratory, and the Director of Northeastern SMART a university research center that, by fostering partnership between university, industry and government stakeholders, focuses on the discovery, pilot manufacturing and rapid transition of new micro and nano systems technologies that are foundational for emerging paradigms like zero-power sensing, 5G/6G communications, artificial intelligence, quantum information science and nanomedicine. Dr. Rinaldi received his Ph.D. degree in Electrical and Systems Engineering from the University of Pennsylvania in December 2010. He worked as a Postdoctoral Researcher at the University of Pennsylvania in 2011 and he joined the Electrical and Computer Engineering department at Northeastern University as an Assistant Professor in January 2012. Dr. Rinaldi’s group has been actively working on experimental research topics and practical applications to ultra-low power MEMS/NEMS sensors (infrared, magnetic, chemical and biological), plasmonic micro and nano electromechanical devices, medical micro systems and implantable micro devices for intra-body networks, reconfigurable radio frequency devices and systems, phase change material switches, 2D material enabled micro and nano mechanical devices. The research in Dr. Rinaldi’s group is supported by several Federal grants (including DARPA, ARPA-E, NSF, DHS), the Bill and Melinda Gates Foundation and the Keck Foundation with funding of $20+M since 2012

Dr. Rinaldi has co-authored more than 180 publications in the aforementioned research areas and also holds 13 patents and more than 10 device patent applications in the field of MEMS/NEMS.
Dr. Rinaldi was the recipient of the IEEE Sensors Council Early Career Award in 2015, the NSF CAREER Award in 2014 and the DARPA Young Faculty Award class of 2012. He received the Best Student Paper Award at the 2009, 2011, 2015 (with his student), 2017 (with his student) and 2020 (with his student) IEEE International Frequency Control Symposiums; the Outstanding Paper Award at the 18th International Conference on Solid-State Sensors, Actuators and Microsystems, Transducers 2015 (with his student) and the Outstanding Paper Award at the 32nd IEEE International Conference on Micro Electro Mechanical Systems, MEMS 2019 (with his student). Prof. Rinaldi is the founder and CEO of Zepsor Technologies, a start-up company that aims to bring to market zero standby power wireless sensors for various internet of things applications including human presence detection, distributed wireless fire monitoring systems, battery-less infrared sensor tags for occupancy sensing and distributed wireless monitoring systems of plant health parameters for digital agriculture.

Prof. Rinaldi is also the owner of Smart MicroTech Consulting LLC, a company that routinely provides consulting services to government agencies, large companies and startups in the broad areas of Micro and Nano Technologies, the Internet of Things, Wireless Communication devices and systems, Radio Frequency Devices and Systems and Sensors.

Dr. Sivasubramanian Somu is a research associate professor in the department of Mechanical and Industrial engineering at Northeastern University since 2013. His areas of expertise are standard CMOS nanolithography/nanofabrication and characterization methods for solid-state devices, Directed assembly of nanomaterials, NEMS, Carbon nanotube-based chemical and biological sensors, Infrared energy harvesting systems, Anisotropic magnetoresistive sensors, Spintronics and Magnetoelectric devices. He has published over 40 refereed journal papers and has been part of numerous grants from government and industry. He has authored more than 10 worldwide and US patents.

Dr. Somu received his BS from Bharathidasan University in 1994, his MS from Annamalai University in 1996 and his Ph.D. from Northeastern University in 2004. He served as junior research fellow at Madras University from 1996-1997. In 2004 he joined the NSF Center for High-rate Nanomanufacturing as a post-doctoral researcher. He was promoted as a Research scientist in 2008 and as a Technology Development Manager in 2010. He has served in several NSF panels and has organized sessions for various local and regional nanotechnology conferences. He is a member of APS and IEEE and has served as an advisor for Advanced Nano Technology Laboratory Central Manufacturing Technology Institute (CMTI) at Bangalore India.

Scott McNamara has worked as a Lab Manager/Clean Room Engineer for the KNMRC at Northeastern University since 2003. He has more than 25 years of experience in vacuum design and processes for semiconductor equipment, specifically PVD and Etch systems. In 2005, he worked with facilities on the expansion of the existing clean room facilities. For the past 14 years, he has been helping professors in coordinating clean room aspects of the microfabrication course taught at the college of engineering at Northeastern University. Currently, he supports KNMRC users in instrumentation training and operations and also serves as the Safety Officer for the entire KNMRC.

He graduated from University Of Lowell in 1989 with a BS in Mechanical Engineering with further studies in Grad School in Plastic Engineering. He worked at Helix Technology (CTI Cryogenics) as a Customer Support Engineer and Manager working with supporting customers such as Intel, Motorola, Applied Materials, etc all over the world. He also worked as an Application Engineer for Kinney Vacuum (Now Tuthill Corporation) designing vacuum systems and supporting special vacuum applications.